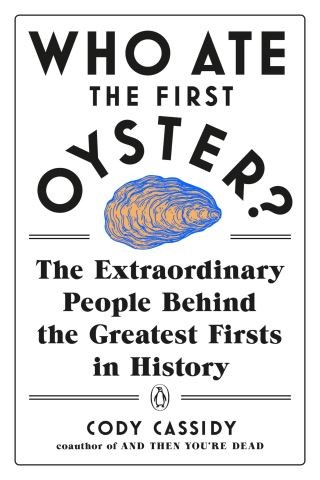 Who Ate the First Oyster?

The Extraordinary People Behind the Greatest Firsts in History

Who wore the first pants? Who painted the first masterpiece? Who first rode the horse? Who invented soap? This madcap adventure across ancient history uses everything from modern genetics to archaeology to uncover the geniuses behind these and other world-changing innovations.

In this book, writer Cody Cassidy digs deep into the latest research to uncover the untold stories of some of these incredible innovators (or participants in lucky accidents). With a sharp sense of humor and boundless enthusiasm for the wonders of our ancient ancestors, Who Ate the First Oyster? profiles the perpetrators of the greatest firsts and catastrophes of prehistory, using the lives of individuals to provide a glimpse into ancient cultures, show how and why these critical developments occurred, and educate us on a period of time that until recently we've known almost nothing about.

Cody Cassidy: Cody Cassidy is the co-author of the popular science book And Then You're Dead, which was translated into more than ten languages, and a former bookstore clerk in Buenos Aires. While writing Who Ate the First Oyster? he attempted to shave with chipped obsidian like the inventor of the world's first razor, retraced the final steps of an ancient murder victim through the Pyrenees and the Alps, brewed beer by spoiling gruel, and fired a replica of an ancient bow and arrow, among other experiments. He lives in San Francisco.