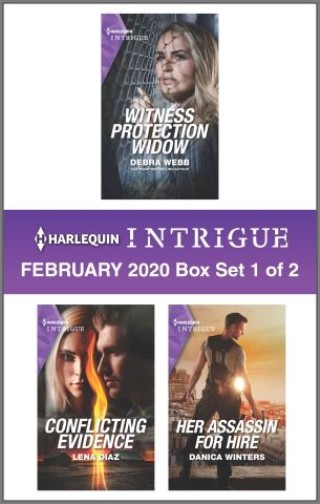 WITNESS PROTECTION WIDOW
A Winchester, Tennessee Thriller
by Debra Webb
In witness protection under a new name, Allison James, aka the Widow, must work together with her ex-boyfriend, US Marshal Jaxson Stevens, to outsmart her deceased husband’s powerful crime family and bring justice to the group.

CONFLICTING EVIDENCE
The Mighty McKenzies Series
by Lena Diaz
Peyton Sterling knows she can only prove her brother’s innocence by working with US Marshal Colin McKenzie, even though he helped put her brother in jail. Yet in their search for the truth, they’ll unearth secrets that are more dangerous than they could have imagined…

HER ASSASSIN FOR HIRE
A Stealth Novel
by Danica Winters
When Zoey Martin’s brother goes missing, she asks her ex, black ops assassin Eli Wayne, for help. With a multimillion-dollar bounty on Zoey’s brother’s head, they won’t be the only ones looking for him, and some people would kill for that much money…

Look for 6 compelling new stories every month from Harlequin® Intrigue!

Debra Webb: DEBRA WEBB is the award winning, USA Today bestselling author of more than 150 novels, including reader favorites the Faces of Evil, the Colby Agency, and the Shades of Death series. With more than four million books sold in numerous languages and countries, Debra's love of storytelling goes back to her childhood on a farm in Alabama. Visit Debra at www.DebraWebb.com or write to her at PO Box 176, Madison, AL 35758.Lena was born in Kentucky and has also lived in California, Louisiana, and Florida where she now resides with her husband and children. Before becoming a romantic suspense author, she was a computer programmer. A former Romance Writers of America's Golden Heart® finalist, she also won the Daphne du Maurier award. She loves to watch action movies, garden, or hike in the beautiful Tennessee Smoky Mountains.Danica Winters is a bestselling author who has won multiple awards for writing books that grip readers with their ability to drive emotion through suspense and occasionally a touch of magic.
When she’s not working, she can be found in the wilds of Montana testing her patience while she tries to hone her skills at various crafts (quilting, pottery, and painting are not her areas of expertise). She always believes the cup is neither half full nor half empty, but it better be filled with wine.