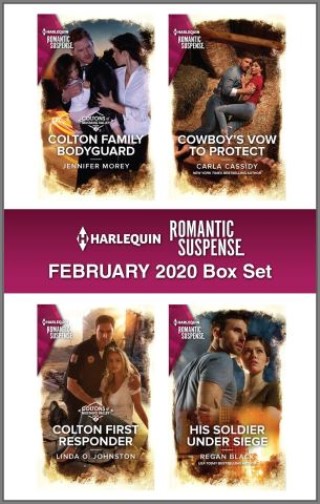 Looking for heart-racing romance and breathless suspense? Want stories filled with life-and-death situations that cause sparks to fly between adventurous, strong women and brave, powerful men?

Harlequin® Romantic Suspense brings you all that and more with four new full-length titles in one collection!

The Coltons of Mustang Valley

After Hazel Hart’s daughter witnesses a murder, former navy SEAL Callum Colton saves them from being run down by the murderer’s car. But now that the three of them are on the run, Callum’s demons are back to haunt him—and he’ll have to focus on the present to stop a killer.

The Coltons of Mustang Valley

Savannah Oliver has been arrested for the murder of her ex-husband, Zane, after their ugly divorce—but she doesn’t believe he is dead. Grayson Colton believes her, and as Mustang Valley recovers from an earthquake, the two of them have to clear Savannah’s name.

Flint McCay had no idea what he was getting into when he found Madison Taylor hiding in the hay in his barn. But now they’re both in danger and Flint must protect both Madison and his own secrets in order for them to make it out alive…and in love.

HIS SOLDIER UNDER SIEGE

Someone is determined to break Major Grace Ann Riley. After Derek Sayer, a friend with benefits, helps her fight off the attacker, he’s determined to help Grace Ann, no matter how independently she tries to handle it. But as their relationship deepens, the attacker is circling closer…

Jennifer Morey: Two-time RITA nominee and Golden Quill winner, Jennifer Morey writes her happy endings in Denver, Colorado. Aside from writing great contemporary and page-turning romantic suspense, she has a geology degree and consults compliance with the International Traffic in Arms Regulations. She loves movies, her three dogs, and her honey--not necessarily in that order! You may contact her through her website, www.jennifermorey.comLinda O. Johnston loves to write. While honing her writing skills, she worked in advertising and public relations, then became a lawyer…and enjoyed writing contracts. Linda’s first published fiction appeared in Ellery Queen’s Mystery Magazine and won a Robert L. Fish Memorial Award for Best First Mystery Short Story of the Year. Linda now spends most of her time creating memorable tales of romantic suspense, paranormal romance and mystery. Visit www.LindaOJohnston.com.Carla Cassidy is a New York Times bestselling author who has written more than 125 novels for Harlequin Books.  She is listed on the Romance Writer's of America Honor Roll and has won numerous awards. Carla believes the only thing better than curling up with a good book to read is sitting down at the computer with a good story to write.