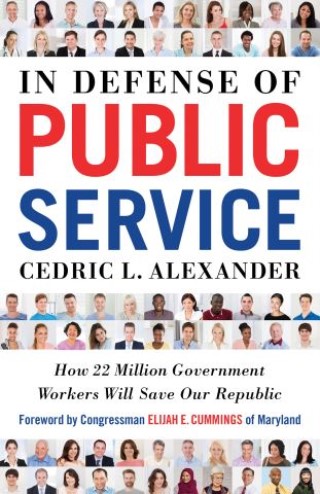 In Defense of Public Service

How 22 Million Government Workers Will Save our Republic

“Dr. Alexander . . . brings to this book an acute understanding of both why our cherished form of government—and those who serve us in the civil service—appears to be under such unrelenting attack and how we, as citizens, should and must respond.”
—from the foreword by Congressman Elijah E. Cummings

When those we elect descend into partisan tribalism, criminal malfeasance, and emulation of foreign autocracies and oligarchies, Cedric Alexander says it is the unelected apolitical "fourth branch" of government—our nation's public servants, civil servants, and first responders—who must save the nation.

Alexander, a former deputy mayor, police chief, and CNN commentator, argues that these people do not constitute a nefarious "deep state" pursuing a hidden agenda. They are the analysts, scientists, lawyers, accountants, educators, consultants, enforcers of regulations, and first responders of every kind who keep the country running and its people safe. Alexander recounts the evolution of the professional civil service as an antidote to widespread cronyism, offers examples of how it has served as a bulwark against powerful corrupting influences, and describes the role it can play in bringing our badly divided society together. To the general public, many of these 22 million people remain invisible and their contributions hidden. But now is the time to make the invisible visible.