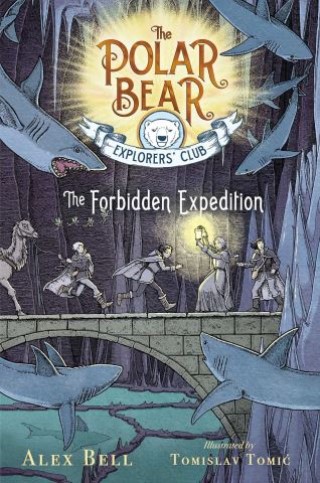 Stella and the gang travel to Witch Mountain to save Felix and what they find along the way could change the course of their adventures forever in this second novel in the whimsical Polar Bear Explorers’ Club series.

Stella Starflake Pearl has been eagerly awaiting her next adventure, ever since she and Felix returned from the Snowy Icelands. She fears, however, that she might never be sent on another expedition, especially since the president of the Polar Bear Explorers’ Club himself is afraid of her ice princess powers. But when disaster strikes and Felix is snatched by a fearsome witch, Stella and the rest of the junior explorers—including a reluctant new ally from the Jungle Cat Explorers’ Club—must set off into the unknown on a forbidden journey to the top of Witch Mountain.

What awaits them there is a mystery. The only thing they know is this: No one ever returns from Witch Mountain.

In the second installment of Alex Bell’s magical The Polar Bear Explorers’ Club series, Stella and the gang face villainous vultures, terrifying witch wolves, flying sharks, and eerie picnicking teddy bears on their daring quest to save one of their own.

Alex Bell: Alex Bell has always wanted to be a writer but had several different back up plans to ensure she didn’t end up in the poor house first. After training as a lawyer, she now works at the Citizens Advice Bureau, a legal advice firm in the UK. Most of her spare time consists of catering to the whims of her Siamese cat.Tomislav Tomic graduated from the Academy of Fine Arts in Zagreb, Croatia. He started publishing his illustrations during his college days, and since then has illustrated a great number of books, picture books, school books, and many covers for children’s books. He lives and works in Zaprešic, Croatia.