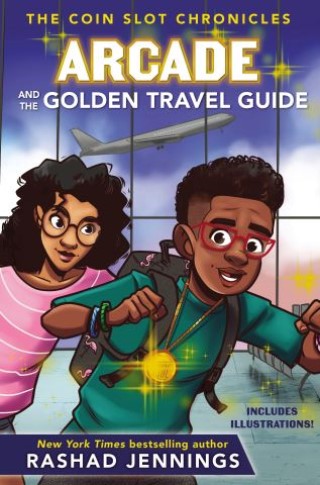 Arcade and the Golden Travel Guide

In Arcade and the Golden Travel Guide, Arcade, Zoe, and their new friend, Doug, travel from New York to Virginia to stay with cousins and best friends, Derek and Celeste. It’s a chance for Arcade to feel “normal” again and connect with people and places he’s loved all his life.

But nothing is normal as long as the Triple T Token is hanging around his neck. Plus, Derek claims he’s stumbled upon some troubling information, and now a suspicious person is following him. Arcade wonders if the trouble is related to the token—after all, someone has already tried to take it from him once.

Where did this Triple T Token come from? And are all the adventures it provides worth all the trouble it brings?

A trip through the token’s fantastical doors reveals a clue—a hidden box of old notes. As Arcade, Zoe, and their friends start to put the pieces together, the value of the token becomes clear, and the stakes are higher than ever. Can Arcade keep the token for himself? Or will sinister forces steal it from his grasp?

Read as part of the series or as a stand-alone novel! Arcade and the Golden Travel Guide is the second book in the humorous and imaginative Coin Slot Chronicles series by New York Times bestselling author, former NFL running back, and Dancing with the Stars champion Rashad Jennings.

New York Times bestselling author and retired NFL running back Rashad Jennings is an impactful influencer, inspirational speaker, and nationally recognized personality. Throughout his successful eight-year career in the NFL, as well as during his championship-winning Season 24 Dancing with the Stars, Rashad gained the love and support of fans throughout the country. Today, Rashad is driven to make a national impact and lasting legacy through The Rashad Jennings Foundation, established in 2013. This award-winning foundation is dedicated to inspiring youth through the foundation’s Flagship Literacy program which is currently successfully implemented in 12 of the 32 NFL cities, in addition to providing mentorship and promoting health and fitness nationwide. Rashad has also authored The If In Life: How to Get Off Life’s Sidelines and Become Your Best Self. Follow Rashad on Twitter, Instagram, Snapchat, and Facebook.