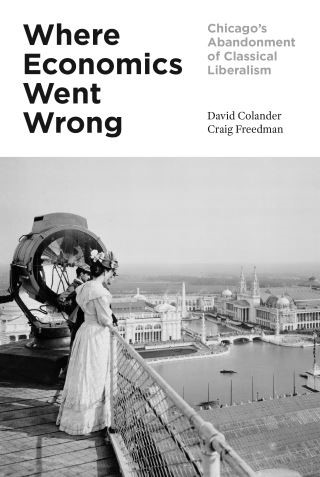 How modern economics abandoned classical liberalism and lost its way

Milton Friedman once predicted that advances in scientific economics would resolve debates about whether raising the minimum wage is good policy. Decades later, Friedman’s prediction has not come true. In Where Economics Went Wrong, David Colander and Craig Freedman argue that it never will. Why? Because economic policy, when done correctly, is an art and a craft. It is not, and cannot be, a science. The authors explain why classical liberal economists understood this essential difference, why modern economists abandoned it, and why now is the time for the profession to return to its classical liberal roots.

Carefully distinguishing policy from science and theory, classical liberal economists emphasized values and context, treating economic policy analysis as a moral science where a dialogue of sensibilities and judgments allowed for the same scientific basis to arrive at a variety of policy recommendations. Using the University of Chicago—one of the last bastions of classical liberal economics—as a case study, Colander and Freedman examine how both the MIT and Chicago variants of modern economics eschewed classical liberalism in their attempt to make economic policy analysis a science. By examining the way in which the discipline managed to lose its bearings, the authors delve into such issues as the development of welfare economics in relation to economic science, alternative voices within the Chicago School, and exactly how Friedman got it wrong.

Contending that the division between science and prescription needs to be restored, Where Economics Went Wrong makes the case for a more nuanced and self-aware policy analysis by economists.