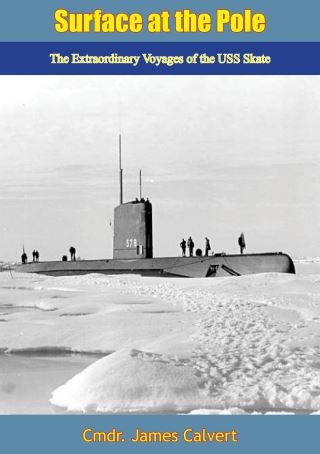 Surface at the Pole

The Extraordinary Voyages of the USS Skate

In this 1960 book, Surface at the Pole: The Extraordinary Voyages of the U.S.S. Skate, U.S. Navy Commander James F. Calvert described his experiences captaining at the Pole.

In 1959, after traveling 3,000 miles (4,800 km) to the pole in 12 days, Skate became the first submarine to surface through the ice when it reached the North Pole on March 17, 1959. There they released the ashes of Australian polar explorer Sir George Hubert Wilkins, who died in November 1958, and who had been the first to try to reach the pole by submarine.

The ability to travel under and break through the ice was a major achievement during the Cold War as it allowed the U.S. Navy’s submarines to avoid detection under the ice while being within range to launch their Polaris missiles from points far closer to the Soviet Union.

Cmdr. James Calvert: James Francis Calvert (September 8, 1920 - June 3, 2009) served in the United States Navy, where he commanded USS Skate, the third nuclear submarine commissioned and the second submarine to reach the North Pole, which became the first to surface at the pole. He later served as the 46th superintendent of the United States Naval Academy.

Born in Cleveland, Ohio, he grew up as an only child and attended Oberlin College for two years before receiving an appointment to the United States Naval Academy. He graduated in 1942, completing his coursework at the Naval Academy in three years under an accelerated wartime curriculum.

He was assigned to attend the Naval Submarine School at the Naval Submarine Base New London and was given a post on the Gato-class submarine USS Jack, where he served for three years. He was awarded two Silver Stars and two Bronze Star Medals, along with a Letter of Commendation. He was assigned in 1945 to serve as executive officer of USS Haddo. He was on Haddo in Tokyo Bay during ceremonies for the Japanese surrender.

After the end of WWII, Calvert spent three years at the Submarine School as an instructor in the Torpedo Data Computer. He was assigned to serve as executive officer on USS Charr and then of the Tang-class submarine USS Harder. He later became commanding officer of USS Trigger, another Tang-class boat. After training by the Atomic Energy Commission, Calvert was assigned to USS Skate, the Navy’s third nuclear-powered submarine and the first to be designed for assembly line construction rather than as a one-off prototype.

With the support of Admiral Hyman G. Rickover, Calvert rose to vice admiral. He was named as superintendent of the U.S. Naval Academy in 1968, where he introduced 20 different majors to midshipmen.