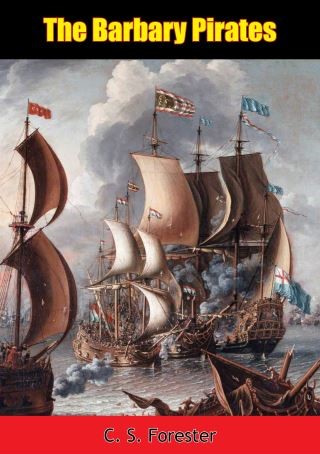 C.S. Forester, creator of the beloved Horatio Hornblower series, takes young readers on an exciting adventure to the shores of Tripoli in North Africa. That’s where, more than 200 years ago, the United States was threatened by “pirates” who snatched American merchant ships and imprisoned sailors—and the country’s young, untested navy took on the task of fighting the pirates in their home waters.

This true tale features thrilling ocean battles, hand-to-hand combat, and the first landing on foreign soil by the U.S. Marines, and it’s as fresh and relevant today as when it was first published (1953).

C. S. Forester: CECIL LOUIS TROUGHTON SMITH (27 August 1899 - 2 April 1966), known by his pen name Cecil Scott “C. S.” Forester, was an English novelist known for writing tales of naval warfare, such as the 12-book Horatio Hornblower series, depicting a Royal Navy officer during the Napoleonic wars. Two of these books, A Ship of the Line and Flying Colours, were jointly awarded the James Tait Black Memorial Prize for fiction in 1938.

Born in Cairo, Egypt, he moved to London as a child and was educated at Alleyn’s School and Dulwich College, south London. He began a medicine degree at London’s Guy’s Hospital, but left to pursue a full-time writing career in 1921.

In addition to the Hornblower series and The African Queen (1935), filmed in 1951 by John Huston, Forester wrote many other novels, including: The General (1936); Peninsular War novels in Death to the French (published in the U.S. as Rifleman Dodd); The Gun, filmed as The Pride and the Passion in 1957; and seafaring stories such as Brown on Resolution (1929), The Captain from Connecticut (1941), and Hunting the Bismarck (1959), which was used as the basis of the screenplay for the film Sink the Bismarck! (1960).