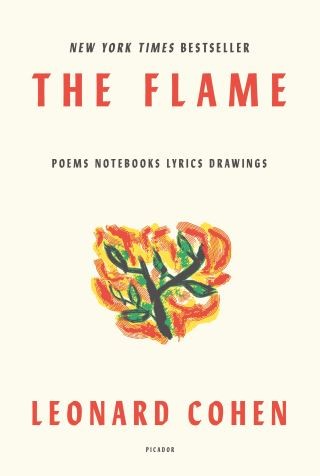 Named a Fall Read by Vogue, Esquire, The Washington Post, TIME, Vanity Fair and O, the Oprah Magazine. One of Daily Mail and Financial Times's Best Books of 2018.

“There are very, very few people who occupy the ground that Leonard Cohen walks on.” —BONO

The Flame is the final work from Leonard Cohen, the revered poet and musician whose fans span generations and whose work is celebrated throughout the world. Featuring poems, excerpts from his private notebooks, lyrics, and hand-drawn self-portraits, The Flame offers an unprecedentedly intimate look inside the life and mind of a singular artist.

A reckoning with a life lived deeply and passionately, with wit and panache, The Flame is a valedictory work.

“This volume contains my father’s final efforts as a poet,” writes Cohen’s son, Adam Cohen, in his foreword. “It was what he was staying alive to do, his sole breathing purpose at the end.”

Leonard Cohen died in late 2016. But “each page of paper that he blackened,” in the words of his son, “was lasting evidence of a burning soul.”

Leonard Cohen: Leonard Cohen was born in Montreal in 1934. Soon after graduating from McGill University, he published his first collection of poems, Let Us Compare Mythologies, in 1956. He would go on to publish a dozen more volumes of poetry, including Book of Longing, and two novels, The Favourite Game and Beautiful Losers. A hugely influential and critically acclaimed singer and songwriter, Cohen released fourteen studio albums between 1967 and 2016, the last being You Want It Darker, for the title track of which he posthumously won the Grammy for Best Rock Performance. He was inducted into the Rock and Roll Hall of Fame in 2008 and the Songwriters Hall of Fame in 2010, and was honored with a Lifetime Achievement Award at the 2010 Grammys. He won both the Prince of Asturias Award for Literature and the Glenn Gould Prize in 2011, and the first PEN New England Song Lyrics of Literary Excellence Award in 2012. Cohen died in Los Angeles on November 7, 2016.