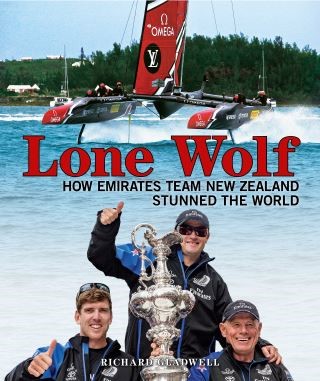 On June 26, 2017, on the turquoise waters of Bermuda's Great Sound, Peter Burling (26) became the youngest ever helmsman to win the premier trophy in sailing, the America's Cup.Amongst several other firsts, the Royal New Zealand Yacht Squadron became the first club ever to win back the America's Cup — and did so against one of the best funded and technologically astute teams in the 166-year history of the event.Along with sailing partner Blair Tuke, Burling put down another marker in sailing history to become the first crew to win an Olympic Gold medal and an America's Cup inside a 12-month period.The rookie New Zealand crew, of whom only one had previous America's Cup experience, trounced the Defender, Oracle Team USA led by the brash Australian, Jimmy Spithill who had ripped the heart out of the Kiwi sailing nation just four years before.Lone Wolf is a celebration of the Emirates Team New Zealand win in Bermuda, written from an on the water perspective by one of the world's most influential America's Cup photo-journalists, Richard Gladwell, who also shot many of the images used in the 200-page book. This include images deliberately withheld prior to the Cup as they were “too revealing” of the Kiwi boat and technology.Gladwell closely followed Emirates Team New Zealand through its highs and lows after the 2013 upset in San Francisco. He captured the first images of the “cyclors” on the morning the AC50 Aotearoa was first splashed in Auckland and broke that story to the sailing world.He was in Bermuda for the 28 days of racing in the 35th America's Cup Regatta and had a ringside view of the racing from a photography boat. Gladwell was in a unique first-hand position to see the highs and lows of the New Zealand campaign and will relate how a remarkable victory unfolded.

Richard Gladwell: Richard Gladwell is an international sailing journalist and photographer who lives in New Zealand. He began sailing when he was ten years old and first wrote about the America's Cup five years later. A Kiwi representative sailor, he competed internationally in dinghies and keelboats for 12 years, sailing with and against some of the current senior members of Emirates Team New Zealand. He has covered the America's Cup and Team New Zealand in its various renditions for the past 30 years. For 20 years, Gladwell was an International Sailing Judge, including ten years as an International Umpire — the same qualifications held by International Jury and Umpires for the America's Cup and Olympics. Gladwell is one of three New Zealanders on the Selection Panel for the America's Cup Hall of Fame, along with PJ Montgomery and Hamish Ross. Gladwell is a news photographer, who uses his images to help tell the story as much as the words. In 2016, he placed fifth in the Mirabaud Yacht Racing Image of the Year, an event open to top professional and other photographers for an image he shot during the 2016 Olympic Regatta. It is the highest place achieved in this prestigious competition by a New Zealander.