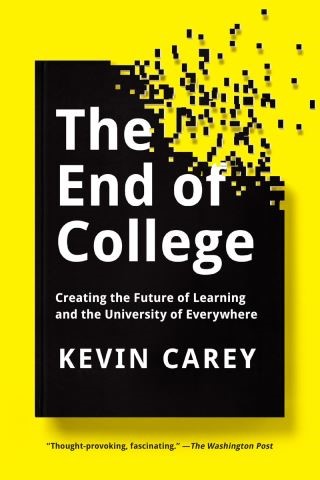 The End of College

Creating the Future of Learning and the University of Everywhere

From a renowned education writer comes a paradigm-shifting examination of the rapidly changing world of college that every parent, student, educator, and investor needs to understand.

Over the span of just nine months in 2011 and 2012, the world’s most famous universities and high-powered technology entrepreneurs began a race to revolutionize higher education. College courses that had been kept for centuries from all but an elite few were released to millions of students throughout the world—for free.

Exploding college prices and a flagging global economy, combined with the derring-do of a few intrepid innovators, have created a dynamic climate for a total rethinking of an industry that has remained virtually unchanged for a hundred years. In The End of College, Kevin Carey, an education researcher and writer, draws on years of in-depth reporting and cutting-edge research to paint a vivid and surprising portrait of the future of education. Carey explains how two trends—the skyrocketing cost of college and the revolution in information technology—are converging in ways that will radically alter the college experience, upend the traditional meritocracy, and emancipate hundreds of millions of people around the world.

Insightful, innovative, and accessible, The End of College is a must-read, and an important contribution to the developing conversation about education in this country.

Kevin Carey: Kevin Carey directs the Education Policy Program at the New America Foundation. His writing has appeared in The New York Times, The New Republic, The Washington Post, and elsewhere. Carey lives with his wife and daughter on Capitol Hill.